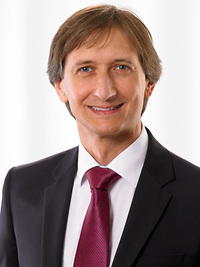 Graduate engineer Richard Damm has been President of the Federal Motor Transport Authority since 1 February 2020. He is also chairman of the international expert panel for automated and networked driving of the UN Economic Commission for Europe in Geneva.

Before being appointed President of the Federal Motor Transport Authority, Richard Damm worked at the Federal Ministry of Transport and Digital Infrastructure in Berlin. There he was responsible, among other things, for the introduction of market surveillance of motor vehicles in Germany. Under his leadership, the use of miniature electric vehicles in Germany was also made possible.

Richard Damm is an internationally recognised expert in the field of the worldwide harmonisation of regulations for the approval and monitoring of motor vehicles. Under his leadership, the globally applicable regulations on vehicle regulations were further developed to reduce trade barriers. Richard Damm was also a member of the Board of Directors of the European New Car Assessment Programme, a consumer information programme on the safety level (Euro NCAP) and environmental behaviour (Green NCAP) of new vehicles. His area of expertise also included automation, networking and digitisation issues at EU and UNECE level.

Before joining the Federal Ministry of Transport and Digital Infrastructure, Richard Damm spent five years working on national and European research projects on passive safety and biomechanics of vehicles at the Federal Highway Research Institute.

After a technical education Richard Damm studied mechanical engineering - automotive engineering and product development at the Technical University of Munich.