The expansion of globalisation and world trade lead to vehicles and vehicle parts of the most diverse origins entering the European market. This makes it necessary, on the one hand, to control the import of products and, on the other hand, to sanction products that are nevertheless illegally made available on the market.

In the interest of road safety, numerous vehicle parts, among other things, may only be offered for sale on the German market in a design or type-approved version. The Kraftfahrt-Bundesamt (KBA) monitors compliance with these legal requirements as part of Market Surveillance, among other things in the context of carrying out fine proceedings. This concerns, on the one hand, the vehicle parts mentioned in § 22a (1) of the Road Traffic Licensing Regulations (StVZO) and, secondly, according to § 27 (2) of the EC Vehicle Approval Regulation (EG-FGV), various vehicle parts subject to type approval according to European regulations.

These are in particular safety-relevant vehicle parts. In the interest of road safety, the sales bans are intended to ensure that non-approved vehicle parts with the possibility of defective design are not placed on the market. Violations of these sales bans can be punished by fines of up to € 5,000.00 per offence. In the context of a skimming of the economic benefits, the fine may also exceed this amount. Fines are imposed on the basis of continuous market observation.

In addition, KBA also carries out fine proceedings in the case of other infringements, e.g. by manufacturers in recall proceedings.

In times of globalisation, free movement of goods and e-commerce, the inspection of products already at the European external borders is of particular importance. With the help of import control checks, KBA actively prevents the import of goods that would otherwise be subject to sanctions. The EU has issued a multitude of regulations on the safety and labelling of products. The aim is to ensure that only safe products enter the European internal market.

The customs administration and KBA cooperate in import controls. If there are doubts about the importability of a product, the customs authorities temporarily suspend its release for import. KBA then checks this product and decides on its importability.

For the cause of road safety, certain vehicle parts are only permitted to be brought onto the German market in an approved design.

According to § 22a Straßenverkehrs-Zulassungs-Ordnung (StVZO), the vehicle parts (e.g. headlights, illuminants, bicycle lights) named there in Paragraph 1 are only to be offered for sale in Germany in a type-approved design and provided with appropriate approval marks.

.According to § 24 (1), (2) Straßenverkehrsgesetz (StVG) one is acting illegally, if one deliberately or negligently offers for sale vehicle parts, which must be executed in an officially approved design, although they are not marked with an officially stipulated and issued approval mark

This offence is prosecuted by the KBA..

This offence can be punished with a fine of up to

There is no schedule of penalties.

Yes, solely the objective possible use in public road traffic and not the subjective determination of use of the vendor is decisive for the banning of offering for sale in accordance with § 22a (2) Straßenverkehrs-Zulassungs-Ordnung (StVZO) of vehicle parts in the scope of application of the StVZO. Accordingly, even advice such as: “... not approved for road traffic and does not fulfil the StVZO!” or similar formulations is never sufficient for the offering of vehicle parts without approval marks (cf. OLG Hamm, verdict of 13 June 2013 – 4 U 26/13 –, juris)

Yes, according to Article 27 Para. 2 Regulation for the EC Vehicle Approval Regulation (EG-FGV), the vehicle parts for use in road traffic subject to type approval and marking according to the European legal regulations named there may only be offered for sale if they bear a type-approval mark.

An infringement represents an offence according to Article 37 Para. 2 EG-FGV in con-junction with Article 27 Para. 2 EG-FGV and is prosecuted by the KBA. The framework of fines corresponds with § 24 (1) Straßenverkehrsgesetz (StVG) (see above).

No, normally it is the vendor’s requirement to inform themselves about the legal stipulations before starting to trade, so there will normally be an avoidable and therefore insignificant mistake regarding prohibition.

Only in the case of unavoidability of the error is the act not reproachable and not punished with a fine.

Type approved vehicle parts can be recognised by the type approval mark on the product.

Approval marks (examples) (only in German)

The carrying out of changes to a vehicle by installing vehicle parts, which are subject to approval, but have not been approved, can lead to the termination of the operating license of the vehicle, if 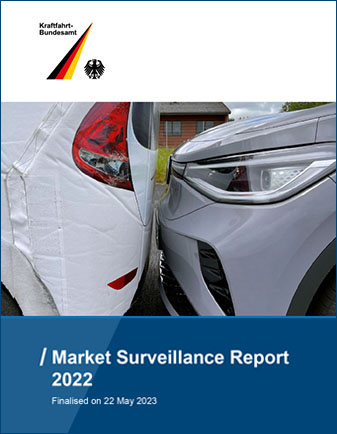